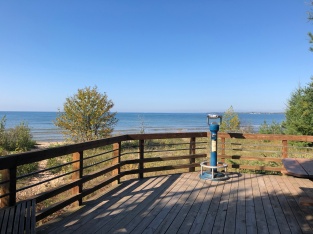 a short path to Lake Michigan 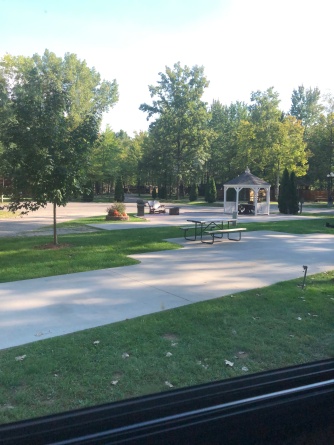 I took 15 days to get to Michigan.  If I drove a long ways one day, I would park for two days. If a short day, I only stopped overnight.  This worked pretty good for the 3 of us, who haven’t traveled in the RV for over a year. It really was a most enjoyable trip east. The weather was no where near as hot as it was last year and no smoke. A delight!  I was even impressed with North Dakota, as the last time I traveled thru there, the areas west of Bismarck appeared to be destroyed by all the oil drilling and extractions.  It was a major improvement to see it almost look normal.

In Minnesota – it was a simple joy to be back in familiar territory. I stopped in Paynesville, trying to find the home of my cousins. Did not.  Then just kind of roamed around. Funny, I remember more of my time with them up in Lake of the Woods in Province Ontario then I do of them in Paynesville, St. Paul or even in Anoka. Nonetheless, it was neat to be back in the area of my teen years.  Lots of fond memories. Wish I could have connected with any of them this trip, but none responded to my quest for a meet up.  So onward.

I should mentioned, I started seeing a wee bit of Fall colors in Minnesota, then in northern Wisconsin and the Upper Peninsula of Michigan.  Beautiful reds.  But no images yet.  In UP MI, just east of Wakefield, my GPS took a major dislike of a detour, and sent me down a logging road.  Luck will have it, a guy was mowing along this road and I said I was lost and could he help me?  He informed me that about a mile down the road was a turnaround for snowplows.  Off I go, only to discover I had to disconnect my car to turn around. No big deal!  But… I could not, for the life of me, get the bolt out of one arm, got the other one without issue. All the tricks I have learned on this towing business failed this time. I was stuck!!!  Called Coach-Net. But how do you tell someone where you are when you don’t know?  As luck will have it, the mowing guy got concerned when I had not passed him by once again.  He eventually got the pin out, but had to hammer at it to get it to budge. Weird.  He asked if I needed help getting the RV turned around and re-hooked up the car. I smiled and he looked at me, and said “oh! Just honk on your way out!” and he left.  It wasn’t difficult to get turned around, but as I was in the process of re-hooking up the car, I heard a rustling in the woods not far from me.  All I could see was something black moving toward me. Untangled myself from the tow bars and got into the car quickly. It was a black bear cub. The cutest darn bear, would loved to have picked him up like a teddy bear – but where was his Mom?   After 5 or so minutes, the cub ventured back into the woods, still no sign of a Mom bear. Whew

So back to finishing the connection. Drove out to where the mower was. He was standing along the road, looking very much as an undecided fella (should I go back and check on her or not kind of look). He was so relieved I came back by. Learned his name was Wayne.  Nice, nice fella.  And off I went on thru Michigan.  Michigan has the worst roads, jarring affect and no way to escape it.  Unbeknownst to me, the rough roads disconnected my drive/tow switch on my car, plus disconnected the Invisi Brake System wire under the hood. And I had a dead car on two mornings. What the heck?  Turns out I needed a new battery, as it no longer holds a charge.  Made it to my friends place in Schoolcraft, MI.  Their oldest son, fixed my wiring issues, replaced my battery and didn’t charge me anything. Lucky on that one.  It was hot in MI – days in the high 80’s and nights not cooling off at all, staying in the 70’s..  Great seeing them, so might stop back in on my way west to see them again.  Great friends.

Onward to New York state.  No Fall colors in upstate NY yet.  It was quite warm when I got here, but the night was a delightful 49º the first morning. I can live with this. More on this leg later.