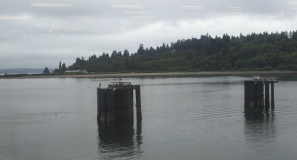 The above images are of my arrival to Seattle via a ferry and as I was leaving Seattle on the ferry.  I did not see the skyline when I arrived due to low clouds. So was delighted to see it all today when I left. Still darken images due to clouds, but at least it had stopped raining. My friend Caroline suggested that I ride that ferris wheel, that is sitting on a spit of land sticking out over the water. Panoramic views are apparently to die for.  So will check it out sometime.  The Seahawks & baseball stadiums are shown in the upper right image, next to one of many shipyards.

Ah yes…My VA appointment exceeded all expectations and now I’m a wanted gal. Not surprised once they learned about me… and they have agreed to let me travel, so am heading out soon.  Yippee!!!  Alas, must come back relatively early for a battery of appointments, MRI’s, etc. Will just have to deal with that – then!

My partner in crime… Irene, is back in town and just excited about heading north as she was a month ago.  So with last minute packing, awaiting the day we have ferry reservations, topping off propane and gas tank – possible a wee bit more grocery shopping we will be heading out – sooner then later. Don’t expect another posting on here until just after the first of June – which is about average for my non-traveling days. Being back on the road gets me so jazzed and no matter how many times I have driven this road to and fro – I still enjoy this road trip!