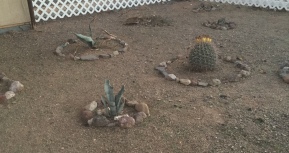 Had an easy trip eastward from Yuma, then southward. I have friends from Chimacum that winter down in the area near Ajo, so wanted to see where they are. Ajo is not pronounced as “A Jo” as it looks, nor is it “Ah Jo”. It is “Ah Ho”.  Ajo is a small, small town out in the middle of nowhere. It does have a post office, grocery store, even a gas station so it is quite doable for these parts.  My friends tho, are further south, up in a high desert surrounded by mountains. It is high end boondocking if I have ever found.  No hook-ups whatsoever. One needs solar, as the generator is definitely frowned upon, in fact they will ask you to leave. Perfect! Smiling here.  The area is haven to folks from the Northwest, it seems, with a few flashes of Alaskans stirring the pot. One odd bird from Miami is known, but wow what an interesting mix of people.  It is a huge private park, the price is right, as they provide: 4 separate bath houses (toilets/showers); 4 dump stations;  water is accessible, laundry & a clubhouse are available. The views posted upon are from this park.  Ruth has been hiking with new friends, and I have been riding my bike – a nice challenge over non-paved roads, with inclines that make the muscles burn to its core. Loving it!

Wildlife seen here are wild burros, jack rabbits, bunny rabbits, lizards, birds. When it gets warmer we’ve been told to expect rattlesnakes, scorpions and other reptiles.

I experienced one of the real joys of being a full timer… a long soaking hot shower. Not powerful spray, but this gal did not care. It was awesome… one of the signs in the shower said “Watch for rattlesnakes” – oh yeah?  Will let’s just hope that’s after I leave… I don’t really have a problem with snakes, but don’t want to experience them in a shower.

I have managed to weave since arriving here, another joy of mine.  Please note Tucker, one of my two felines, on my loom in the above pictures. He loves to sleep on “his hammock” and eyes me when I come near. I had a battle royal with him yesterday, when I would get up to rewind bobbins, he would get up on my handwoven section and would have to be kicked off. Repeatedly.  So now, I throw my bench pad over it to protect it, even for a few short minutes.  Tomorrow, he will have to find another place to rest, as the project is coming off the loom. Yippee!

Last night, Ruth & I went to a jam session over at the community center. About a dozen guitars (acoustic, bass, electric, & a slide), one mandolin, two fiddlers, spoons, and a string bass. It was quite an enjoyable mix of music. My foot was tapping away…  They don’t practice together, just whoever shows up and they have fun making music. Just lucky enough to learn about it, so we went.  Tonight is a dance at the clubhouse, I may be parked just shy of a mile from the clubhouse, but it is pitch black out here and I got to tell you, I get lost in the daytime. Creosote bushes all look alike – day or night. Laughing here. There are no other real identifiers to find one’s way.  Oh, I guess I could use the magnificent stars in the sky… no, I think I will just stay home.